Gianluca Zaghi’s company, Vintage Speed Bicycles, rebuilds and restores classic racing bikes made by the great Italian, French, and Swiss frame builders of the 1950s-70s. From his workshop near Lugano, Gianluca keeps contact with a growing worldwide community of devotees of these beautiful, fascinating machines.

What led you to restore old bicycles?

In 2010, I lost my job. A friend asked me to buy a bicycle so we could go for rides together, now that I had plenty of time. But new bikes are expensive and, to my mind, pretty shitty – so I went on eBay and got a vintage bicycle. When I got it home, I thought, “I can make this better;“ so I went back on eBay to find parts. I suddenly realized that there was something huge here: all of these bicycles and parts, made by the classic manufacturers based 50-60 kilometers from where I live – all in my area! I investigated further and found I had stumbled on a wonderful business: “Let’s see if I can make it work.” At first it was just my private passion, but I discovered that people were becoming attracted to my work through social media. Within 6-8 months of my starting to collect bicycles and parts and showing my restoration work online, my viewing numbers on Flickr jumped from 28 thousand to over 400 thousand. A basic Google search was returning my business in the first, second, and fourth places. My passion had become an addiction – and not just for me. I love to get my hands dirty. I put all my love into every bicycle that I touch – and I have made some amazing bicycles. Now I have sold more than two hundred of them in 63 countries around the world: the US, UK, Japan, Brazil, Canada…

New bicycles have so many technological advantages. What is the appeal that people find in a vintage one?

Partly it’s the economic situation; new bicycles cost a lot. It’s also a cultural shift, where cycling itself is now attractive. When the Mayor of London can change the whole thinking of a city and get people on bikes, you can see other cities learning from this, trying to be more green, with less traffic. There’s also the object itself. A modern carbon bike is just stamped to one pattern in Taiwan: they’re all the same except for the decals and paint. When I work on a vintage bike, I see the hand of the master who made it. It’s not just eight tubes welded together: it’s particular joints, specifications, lugs, all hand made. It’s honest, put right in front of you, so you can see directly if it is good, rubbish, or a masterpiece. On the Gloria “La Garibaldina Extra” that I have just finished restoring, the lugs are shaped like flowers. You see such things once and you just fall in love.

Campagnolo gear components are like jewellery – and the quality is wonderful: just clean it, polish it, and it works like new. Every part invites your judgment. You form an opinion on the function and beauty of each element. You don’t see anything like that on a modern bike. Some people like doing the restoring: you buy the pieces and the frame and you make the bike how you want. It’s appealing to put your own hand to the work and have the result that pleases you. And it can cost just €500 for a nice bike with the character you want. You can participate in events, like the Eroica in Tuscany, where 5,000 people tour together on vintage bicycles. So – economics; self-satisfaction; participation – and fashion. Look in the catalogues of Armani or Dolce & Gabbana, you will see vintage bicycles. It represents classic style and real craftsmanship. 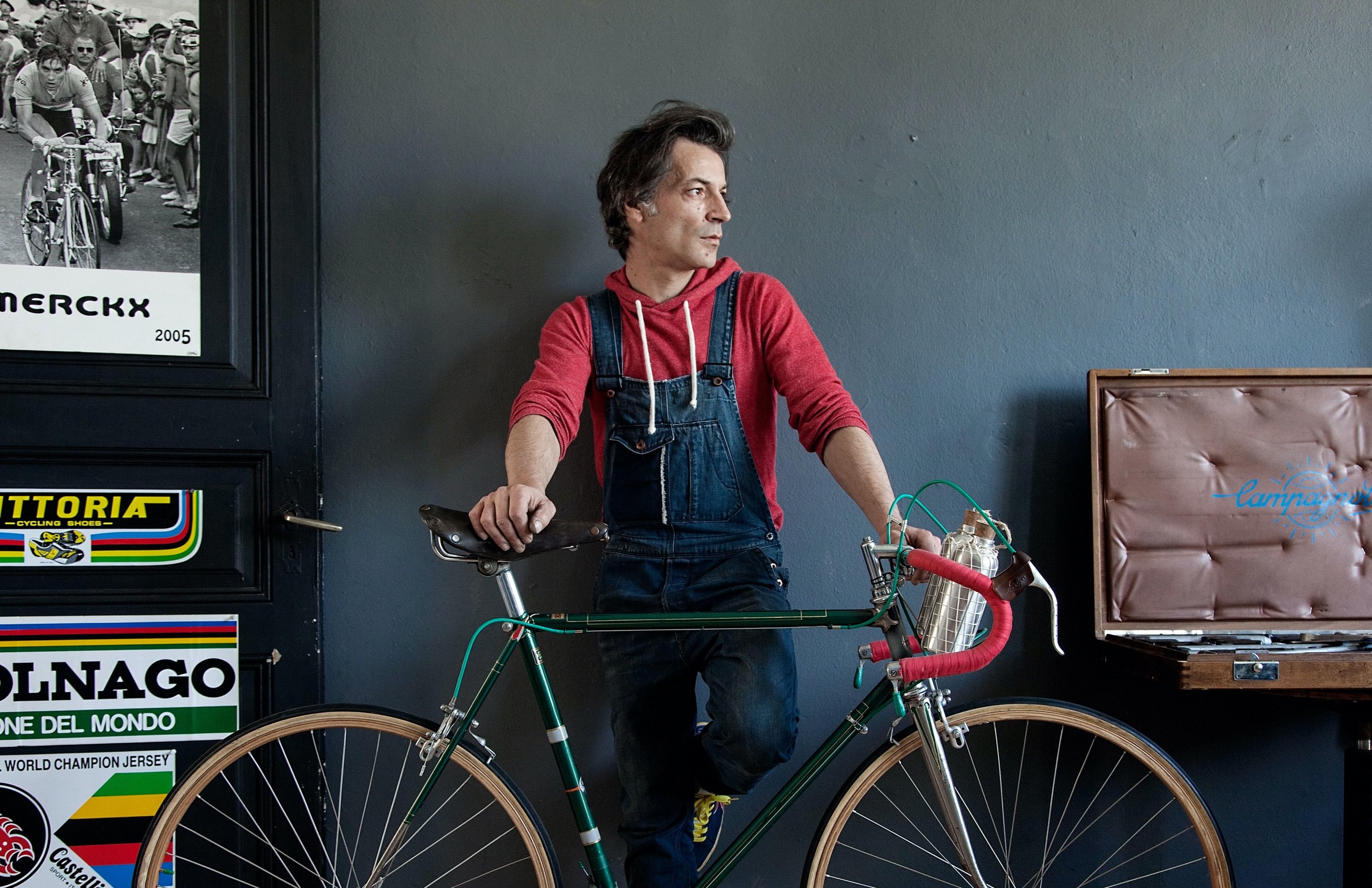 What is it that gives a bicycle such resonance in the imagination?

There is poetry in a bike… it’s difficult to put into words. The best comparison is the relationship between a rider and a horse; there is a feeling like a human relationship. You care for it, look after it. And there’s also thought: your mind is set free as you ride. You spin the pedals and your ideas are no longer stuck on the ground, but rise to a new level. Also, there’s the social significance – the way bicycles liberated a whole generation of people from being bound to one place, one employer. In Italy, it was like a revolution. A bicycle is the most democratic form of transport: it gave people the means to achieve new goals – moving and working. And I can’t help but remember the great champion Gino Bartali saving thousands of Jews during the war by carrying messages in the handlebars of his bike… there is history and revolution in this machine. 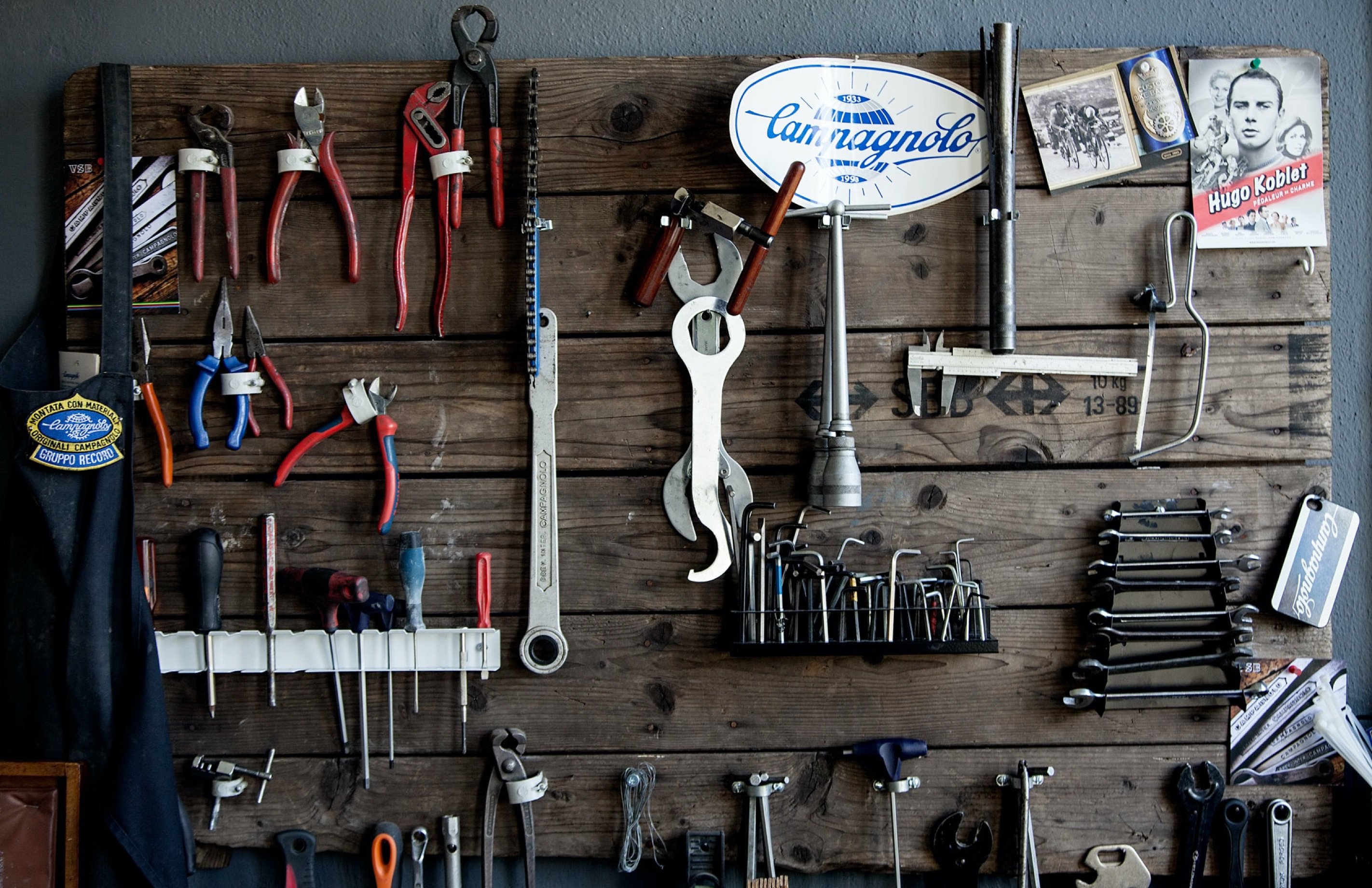 Where are some of your favorite places to ride?

I ride mostly around here, in my own country, but any place is good to ride, if there is a road and sunshine. I like riding with a friend, because then we are pushing together, trying to improve: it’s training for body and mind. But if it’s just for pleasure, I do it on my own. But then, I also have the special show ride when I have just completed a restored bicycle: I take it into Lugano and ride it around. It’s like my shop window: people, especially foreign tourists, stop me to talk about it, the word gets around – and soon I have a sale.

What do you feel you have learned from this vocation?

I’ve learned about time: how you can lose yourself. There’s no stress, you take a trip to another planet where there are no structures, hours, deadlines, expiry dates. There is only passion, the love of doing it, and the result. It’s a dimension where time slows – like a bicycle, not a Ferrari. Passion is the first thing; appreciation is the second. People appreciate my work because I build every bicycle as if it were my own. And if it pleases me, it is going to please everyone, since my standards are so high: I am a picky bastard. And I keep pushing those standards higher… because otherwise, what’s the point? When some guy in Japan sends me a message to say, “The  bike you sent me is amazing!” that’s the satisfaction. I love to share the beauty, to put it back on the roads. Social media lets me share my passion with the whole world. And yet these people are buying these bicycles without ever touching them. They’re buying the pictures, but they trust my work, because with social media, they can come to know me and understand my commitment. So a customer can even send $17,000 for a bike he has only seen in photographs. Last month, I posted a newly-restored bicycle for sale – and it went in seven seconds. I lvie and breathe my work, totally and fully. These are precious things, but they offer so much more than, say, a diamond would. That’s just there, an object – but this is continuously moving, growing, coming back to you, freeing your mind. Your obsession starts slowly, then grows into an addiction. That’s how they are: I will get under your skin!  You will become addicted!”

Share Your Passion. We are all different, but difference is not enough; to make your mark in the world, you need to show your commitment, your obsession, the knowledge and experience that sets you apart. In the past, only his village new what an amazing man Gianluca Zaghi was – but now the world beats a virtual path to his electronic door. Social media provide the tools; branding beyond difference makes the difference. And we think that’s Wanderful. 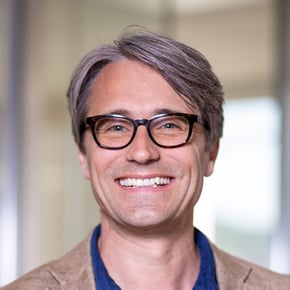 After completing a Master's degree in Communication at the University of Italian Switzerland, Florian Anderhub has been leading Ander Group since 2006. His multicultural background, 21 years as an entrepreneur and passion for technological innovation are a guarantee of growth for his clients.

A few minutes with Paolo Quirici

Stefanos Demertzis M.D. is an Associate Professor at the University of Bern and Head of the Department of Cardiac Surgery at ...
Start Reading